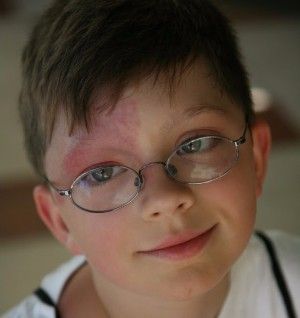 A Personal Experience with Glaucoma

Kimberly Slater has been with the SWF since 2006.  She is a Licensed Clinical Social Worker (LCSW) in NYC but has recently moved back to Florida to fully embrace her familial support system.  Because she is an active SWF Support Volunteer she has been in touch with several other members on vision and glaucoma concerns.  When Shelly Rauschuber asked us for support for her son Aden as they discussed eye removal surgery, Kim became a mentor and friend.

After living with congenital glaucoma since 1982, caused by the port wine birthmark covering the left side of her face, left eye included, she and her doctors made the difficult decision to have that eye removed.  Kimberly had been diagnosed with Sturge-Weber within weeks of her birth and immediately began to endure the long road of all attempts to control her eye pressure. The goal was to preserve her sight and her left eye for as long as possible. Her first glaucoma surgery was at 6 weeks old and she experienced subsequent glaucoma surgeries throughout her childhood and into adulthood each time the eye pressure spiked dangerously high and became non-responsive to the multitude of eye drops available.

The glaucoma caused complications within the eye at various times, including a detached retina at age 12 but together Kim, her family, and the doctors continued to fight the disease in order to preserve eye function, optic nerve stability, and eyesight. Her high eye pressure caused severe and debilitating headaches, a factor that highly contributed to the eventual decision to proceed with the enucleation at age 30.

Despite early intervention and ongoing specialized care to control the glaucoma and its myriad of complications, Kimberly experienced loss of vision, severe scar tissue from past surgeries and a thick non-surgical cataract which prevented doctors from being able to exam/monitor the back of the eye properly. The glaucoma affected eye was decidedly non- functional; the eye had run its course of possible medical interventions.

Presented with this knowledge and the realization that keeping the left eye would only result in non-controllable eye pressure and the subsequent associated pain, along with deterioration of the eye itself, Kim made the very difficult decision to go ahead with an enucleation. She had the surgery in the spring of 2013 at the Bascom Palmer Eye Institute in Miami, FL.

After her surgery to remove her left eye, she was asked by Bascom Palmer to do a video that could be shown to staff and patients that speaks from the patient’s point of view about the recovery process and after-effects of the surgery.  Her tutorial covers very practical suggestions, accommodations she has made, and how she was able to adapt emotionally and socially.

This video can be viewed at http://youtu.be/xIZMBFz6Zp8  (The misspelling of youtube within the link is NOT an error). The video here is on Kimberly’s private Youtube link (provided), but unfortunately it cannot be searched publically through youtube itself due to copyright issues.