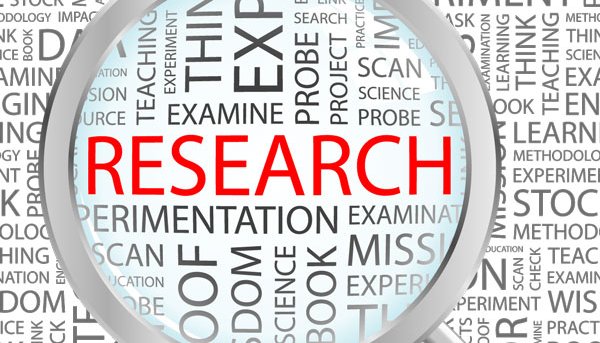 Topic 3: Pathways: What does it mean for Gq to be turned on in Sturge-Weber syndrome? 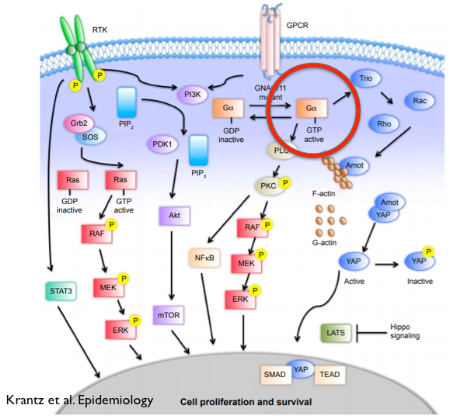 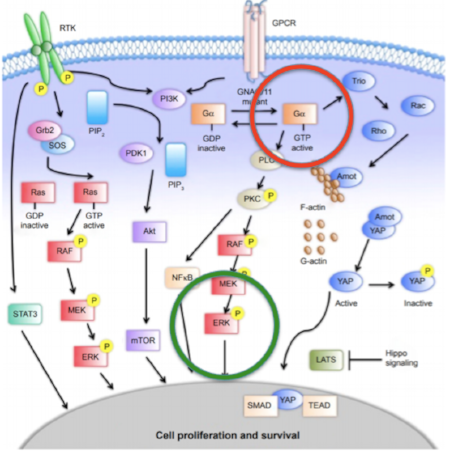 Topic 3: Pathways: What does it mean for GNAQ to be turned on in Sturge-Weber syndrome?

In Topic 1 I told you what a gene is; GNAQ is an example of a gene. The gene makes a protein called GNAQ and I introduced that in Topic 2. I mentioned that the mutation in the GNAQ gene makes a slightly changed GNAQ protein in which one of its amino acids is changed: the R at position 183 becomes a Q. The result is that GNAQ becomes slightly turned on, or activated. And that’s what somehow leads to both port-wine birthmarks and to Sturge-Weber syndrome.

In this topic I’d like to tell you what it means for GNAQ to be turned on. To do that we’ll look inside a cell.

A cell is a basic unit of the body: there are endothelial cells, neurons, melanocytes, hepatocytes, sperm, eggs, and hundreds more types.

One thing cells have in common is that they’re each like a little factory with a power station (the mitochondria), a waste disposal system (the lysosome), transport systems, a structure that keeps things together (the cytoskeleton) and ways of producing things (enzymes).

Another things cells have in common is that they need to communicate with other cells to take in information. They do this using receptors on the cell surface. Here’s a cartoon picture of a cell.

I’ve put a big red circle around GNAQ. Right above it is GPCR (that stands for G protein coupled receptor), and it’s an example of a receptor on a cell’s surface. It extends outside the cell where it can receive signals. When you smell an odor, that odor binds to a GPCR. When you see something, light reaches a special GPCR (called rhodopsin). When you’re scared and there’s an adrenaline rush, the adrenaline goes to a different GPCR. In endothelial cells there’s a receptor for endothelin, a substance that leads to blood vessel constriction.

Do what?
Open a gate to let other things into the cell. Make a brain cell “fire.” Close a blood vessel. Tell a muscle cell to contract. Tell the nucleus to turn some genes on or off.

After the receptor binds something the very next step involves our G proteins such as GNAQ. As the picture above shows, GNAQ starts in an inactive state (see where it says “GDP inactive” and upon receptor binding it switches over to an active state (GTP active; see the part circled in red).

That active GNAQ starts a cascade of effects. Several different pathways are turned on. Each pathway is a set of proteins that turn on other proteins, leading to some final effect.

Why is the cell doing this?
One reason is amplification. A small amount of signal (say, endothelin) can come to the cell, and a receptor can bind it (grab it) and become activated. Then the G protein such as GNAQ can get activated, but many, many copies of GNAQ can respond, offering tremendous amplification of the signal.

If all this sounds complicated, all I can say is, a cell’s job is complicated. Each cell in your body has about 10,000 or more proteins, and they all have jobs to do.

What’s your proof?
When we reported (in 2013) that GNAQ mutations cause Sturge-Weber syndrome, our paper included work by Dr. Doug Marchuk showing that the GNAQ mutation (R183Q) was slightly activating. Dr. Marchuk’s lab introduced “normal” GNAQ and “mutant” GNAQ into cells. I’ve put a green circle around ERK, one of the proteins “downstream” of  GNAQ. If GNAQ is activated then we might expect to see more of an activated form of ERK. And we did see that.

How does your pathway picture in today’s blog relate to the picture of GNAQ from the last blog?
The picture above shows GNAQ. That’s the same GNAQ that I showed you a picture of in an earlier post.

Cells are complicated. We’ve taken a peek inside a cell to see that when the GNAQ mutation causes GNAQ to become altered, there could be lots more effects. We want to know what those effects are so that we can try to design treatments for Sturge-Weber syndrome.