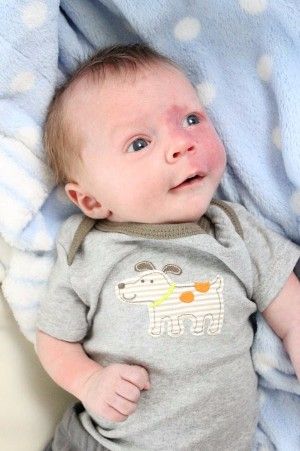 Facial Birthmark
The most apparent indication of Sturge-Weber Syndrome is a facial birthmark or "Port Wine Stain" present at birth and typically involving at least one upper eyelid and the forehead. Much variation in the size of the stain has been reported and may be limited to one side of the face or may involve both sides. The birthmark, varying from light pink to deep purple, is due to an overabundance of capillaries just beneath the surface of the involved skin. In persons with dark pigmentation, the stain may be difficult to recognize. In rare instances, there is an absence of a Port Wine Birthmark.

Neurological Abnormalities
Neurological concerns relate to the development of excessive blood vessel growth on the surface of the brain (angiomas). These are located typically on the back (occipital) region of the brain on the same side as the port wine birthmark. These angiomas create abnormal conditions for brain function in the region. Seizure activity is the most common early problem, often starting by one year of age. The convulsions usually appear on the opposite side of the body from the Port Wine Stain and vary in severity. Vigorous attempts are made to control the seizures with medication. A weakening or loss of the use of one side of the body (hemiparesis), may develop opposite to the port wine stain. Developmental delay of motor and cognitive skills may also occur to varying degrees.

Other Manifestations
Increased pressure within the eye (glaucoma) is another condition which can be present at birth or develop later. The incidence of glaucoma in patients with Sturge-Weber is approximately 70% and 40% for choroidal lesions. The glaucoma is usually restricted to the eye which has the stain involvement. Enlarging of the eye (buphthalmos) can also occur in the eye which has been affected by the stain. Multiple other body organs are rarely affected in Sturge-Weber syndrome. Infants affected with Sturge-Weber Syndrome are often monitored by a pediatrician, neurologist, ophthalmologist and dermatologist.

Treatment
Laser treatment is available to lighten and/or remove port wine birthmarks in children as young as one month of age. Anti-convulsants are used to control the seizures. VNS implants and brain surgery can be also be utilized for seizure management. Eye drops or oral medications are used to control the glaucoma. Should topical or oral medications not prove effective, the next step would be surgery.

In 1992, E. Steve Roach, MD classified the SWS spectrum, delineating for the first time the varying degrees of involvement previously noted in this condition.

Type 1
The most common, this type involves both facial and leptomenigeal (brain) angiomas (vascular malformations) and may involve glaucoma. Seizures usually occur within the first year of life, as a result of the brain involvement. The ocular involvement is normally noted within the first year of life, as well. The white portion of the eye may appear "bloodshot" as a result of the over-proliferation of blood vessels on the eye. In rare cases, the facial and brain involvement are bilateral (involving both sides of the head). Mental and physical development can be impaired to varying degrees, depending on the amount of vascular birthmark throughout the brain and eye.

Type 2
This type involves a facial angioma and the possibility of glaucoma, but no evidence of intracranial disease. There is no specific time-frame for the exhibition of symptoms beyond the initial recognition of the facial PWS. Throughout the life of the individual, interrelated symptoms may manifest in glaucoma, cerebral blood flow abnormalities, headaches, and various other complications. Additional research needs to be conducted on this type of SWS to determine the course of the syndrome over its natural progression.

Type 3
This type of SWS is commonly noted to have a leptomeningeal angioma, with no facial involvement and usually no development of glaucoma. Commonly referred to as forme fruste, this type is identified through brain scans. It can also be confused with other diagnoses prior to a brain scan with contrasting agent. While social stigma is lessened by the absence of PWB, the unknown natural course of the syndrome is still frustrating for parents and professionals treating the condition.