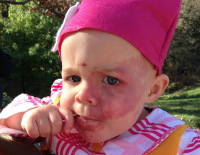 Glaucoma is an optic neuropathy characterized by a specific pattern of optic nerve head and visual field damage. It represents a final common pathway resulting from a number of different conditions which can affect the eye. Most, but not all, of these disorders are associated with elevated intraocular pressure (IOP). Elevated IOP is not the disease itself, but it is the most important risk factor for progressive glaucomatous damage.

What are the symptoms of glaucoma?

Often, glaucoma has no symptoms. In infants, however, glaucoma may be present with photophobia (increased sensitivity to light), tearing and blepharospasm (intense squeezing of the eyelids to avoid bright stimuli). On cursory evaluation, signs of an enlarged cornea, which is often hazy or opaque in appearance, are readily identified. In its early stages, most older children and adults with glaucoma will have no sensation or knowledge of the condition. In some cases, when the intra-ocular pressure elevates to very high levels the individual may feel some discomfort. However, for most individuals there are no tell-tale signs.

Why do people with SWS get glaucoma?

The etiology of glaucoma in SWS is controversial, but may involve two distinct mechanisms. Since many children with SWS develop glaucoma in early infancy, it has been proposed that this glaucoma is similar to primary congenital glaucoma, which develops due to an abnormality in the anterior chamber drainage angle (the plumbing for the eye). This disease occurs infrequently in the general population, with an incidence of approximately 1 in 10,000. Another possible explanation as to why glaucoma develops may have to do with increased pressure within the drain itself, referred to as elevated episcleral venous pressure. This would result from elevated pressure within the venous system of the eye due to the presence of a capillary vascular malformation within the conjunctiva and episcleral tissues.

If you have brain involvement, but no facial PWB, are you still at risk for glaucoma?

Although the risk for developing glaucoma is greatest when the vascular lesion affects the upper eyelid, glaucoma can develop at any age, with and without significant skin findings. Patients with SWS should undergo eye evaluations regularly to rule-out the development of glaucoma.

Will glaucoma only present in the eye where the PWB is located?

It is rare for glaucoma to develop in an eye where there is no PWS, but not impossible. Glaucoma is a multifactorial disease, and patients with SWS may have other reasons for developing glaucoma, unrelated to SWS and its' manifestations.

Is there any difference between the type of glaucoma older individuals have and the glaucoma children with SWS have?

The definition of glaucoma states that it is a characteristic pattern of damage to the optic nerve which has an associated pattern of visual loss. In many cases, the optic nerve damage is caused by elevated pressure within the eye. Elevated pressure within the eye in children, with or without SWS, is likely due to a defect in the drainage tissue of the eye. SWS patients may also have elevated episcleral venous pressure as a cause of increased eye pressure. In adults with glaucoma, the causes of elevated intraocular pressure are much more varied. In adults with SWS, the most likely cause of elevated intraocular pressure and glaucoma is elevated episcleral venous pressure from a vascular lesion of the eye.

What happens to the eye if glaucoma is present?

Patients who have elevated intraocular pressure will often develop glaucoma, which is defined as a characteristic pattern of damage to the optic nerve. Optic nerve damage from glaucoma is commonly referred to as “cupping”. The exact reason why elevated pressure in the eye leads to optic nerve damage is presently unknown. When the optic nerve becomes damaged, the brain can not receive a complete image of what the eye is seeing. Patients usually develop a loss of peripheral vision (side-vision) at first, but can lose central vision as the disease progresses. If the optic nerve is totally destroyed, the brain will not receive any signals from the eye, resulting in blindness. Glaucoma often develops slowly, over a period of months or years. The rate at which glaucoma develops is often directly related to the magnitude of the pressure elevation inside the eye.

What is the best type of test?

For glaucoma patients, it is imperative to measure the pressure inside the eye. This test, called tonometry, can be performed in many different ways, but all require placing a measurement device close to, or in contact with, the eye. It is also necessary to look at the appearance of the optic nerve to determine if damage has occurred. This is often accomplished by dilating the pupil of the eye with medications and looking at the nerve with an ophthalmoscope. In older children and adults, the function of the optic nerve can be analyzed during a visual field test (perimetry). There are also many different devices for recording the appearance and health of the optic nerve tissue.

Why is the conjunctiva red, does the depth of color relate to the severity/presence of glaucoma?

Everyone in the world has some degree of "redness" to their conjunctiva. That is because the conjunctiva is a very thin, clear tissue that covers the white part of the eye (sclera) and carries blood vessels to the ocular surface. Patients with SWS often have an increase in the number and size of blood vessels in the conjunctiva, leading to increased color. The other vascular layer of the surface of the eye is called the episclera. It can also have an increase in the number and size of its blood vessels in SWS. In general, vascularity of the conjunctiva and episclera is not a predictor of glaucoma. However, patients with glaucoma tend to have greater degrees of vascularity in these tissues.

What are the percentages/age range for glaucoma?

For all patients with SWS, there is a 30-70% chance of developing glaucoma. Glaucoma in SWS has a bimodal distribution. Nearly 60% of the patients with glaucoma will develop this condition in early infancy while the remaining 40% develop it in childhood or adulthood.

What are the testing guidelines?

There are no established testing guidelines for patients with SWS. Infants and children with upper eyelid involvement should have a complete eye examination when reasonably possible or within the first 3 to 6 months of life. If there are overt signs of elevated pressure within the eye of an infant or young child (corneal clouding, excessive tearing, increase in the size of the eye) then the pressure should be measured immediately. Children and adults will require repeat eye examinations during their entire lives as glaucoma may develop at any age. The frequency of these visits is made based on individual patient characteristics to be determined by the eye care provider.

Is there any danger in having laser treatments (for PWB) near the eye?

Laser treatments for PWB around the eye pose no known risk to the eye itself.

Other than glaucoma, are there other ophthalmic issues?

Other common findings in the eye of SWS patients include choroidal hemangiomas, tortuous retinal veins and arteriovenous communications. Choroidal hemangiomas occur in up to 40% of patients and consist of a vascular lesion in the blood-vessel layer (choroid) in the back of the eye. If this lesion thickens over time, it can lead to degeneration and detachment of the retina. These lesions can also complicate intraocular surgery by creating swelling and bleeding inside the eye.

What surgery can be done for glaucoma?

There are many different types of surgery for glaucoma. All of these procedures involve the creation of a new, low-resistance pathway for fluid to get from the inside of the eye back into the general circulation. Infants with glaucoma will generally undergo either a trabeculotomy or a goniotomy, which will try to improve fluid flow through the eye’s normal drainage structures. New drainage pathways can be created in children and adults utilizing procedures know as trabeculectomy, tube-shunt or seton placement and non-penetrating filtering surgery.