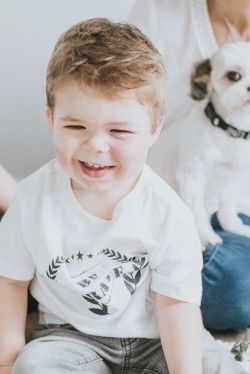 Two and a half years ago the sweetest and strongest boy was born. What neither he or his parents would understand until much later was how much his strength would be tested. While it was a normal pregnancy there was no test to indicate that anything could be anything but "normal". This is the journey about my warrior son, Noah Alexander Peppin.

The large birthmark on his face was the first indicator there was something different. It was soon after, with countless hospital visits with neurologists, ophthalmologists and dermatologists, that we would slowly learn that this birthmark was so much more. Diagnosed with Sturge-Weber Syndrome we quickly found ourselves in an uncontrollable roller coaster of fear, helplessness and the unknown. We tried to educate ourselves as much as we could, trying to understand how and why this had happened, always coming up short for answers.

Sturge-Weber Syndrome is a rare neurological disorder that is associated with seizures, weakening of one side of the body, glaucoma, developmental delays and most noticeable at first is a port wine stain. It's a very complex disease and no two cases are the same. We had never heard of the syndrome, let alone knew anyone who had it. We felt overwhelmed and alone, scared and utterly exhausted.

To date he's had four MRI's, a CT scan and PET scan, various EEG's - as short as 20 minutes and as long as 48 hours, 10 laser procedures and countless seizures. By this count he's been put under GA roughly 15 times. He's on a cocktail of meds to keep the seizures at bay and we've had many seizure free periods. But when seizures come they come fast and they come hard. He's gone into status, been paralyzed on the right side of his body and each time we've had a setback he's clawed his way back. With each new milestone and steps forward and perhaps a feeling that we were in the clear, the ugly monster that is Sturge-Weber Syndrome comes back and reminds us how vicious this syndrome can be.

The stares and the countless questions are still tough for me. Two and half years in and while I know so much more now, the rest of the world doesn't. The comments and the staring hurts. And I can only imagine how much harder it's going to get when Noah goes to school. And yet I want people to ask, just with kindness rather than fear or disgust. I want to educate as many people as possible.

We don't know what the future holds. Whether he will have surgery or if medication can keep the seizures away. If we can retry weaning him off meds. If one day a cure will be discovered. We just don't know. Every day we pray for more answers and pray Noah stays healthy.

We live in the moment as much as we can but the fear never goes away. Throughout the journey the one thing that has changed is that we love our son more today than we did yesterday. At times, it has been the hardest thing we have ever been through and I didn't know how we would get through the moment, let alone another day. But watching him fight like he has makes me try to be strong. I must. For him. For us.

He is the strongest, bravest, most remarkable human and I am incredibly thankful he chose us. We love him so much. Thank you for following Noah's Journey.