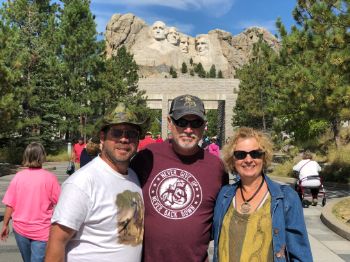 You cannot create an ideal future life for your child, because it just won’t fit the circumstances or the personality and temperament of the child. You have to assess your situation and your child’s abilities. And then look around for what you already have and how it will fit.

And then there is the personality and abilities of the child.  What does your child want?  It is a cop-out to completely disregard or dismiss anything he or she expresses because there may be a disability and you “know best”.  Countless times we have heard of people with SWS who confound the experts.

Parents have the final, moral and legal responsibility, but it is a constant tug of war for parents between what is available, what is appropriate, what if best.   But always remember that there are other parents who have been down that same road.  That is why there is strength in learning all the possibilities.

This is where your intuitive parent comes in to play.  You know y our child best. Trust your decisions- not to make it ironbound and never deviate, but to use your plan to guide you to other possibilities.

Prepared for the Sturge-Weber Foundation; By Wendy Roffers on behalf of Jason Roffers

The question of how we, as parents, have determined the best residential option for Jason has proven to be a difficult subject to put in writing – not only is the subject multi-facet as to living arrangement options but also a subject that really started during Jason’s development years.

As I reflect on your questions – it is hard to believe it has been over 20 years since Mark and I have developed Jason’s living plan. Interesting enough, as we reflect on the past, it was during Jason’s infant/toddler years that we asked that same question to Jason’s neurologist. As we all know, the 80’s was a timeframe of a very small definition of SWS in the medical references – and Jason’s neurologist was even more naïve as to living options when he replied to our question of “what does Jason’s future look like?”, with his response “you need to understand that you will need to commit Jason to an institution when he turns 18”. That was actually the beginning of our life plan for Jason – get a new neurologist! At that time, however, we did not know the magnitude of medical decisions we would face along the way … much less know what residential options would look like.

It was probably a path we started without even knowing – when Jason and his brother were young, we lived in Green Bay and had a cottage that we retreated to on the weekends. Jason loved the peacefulness and serenity of the North Woods – and definitely did not have to worry about the daily distresses of kids picking on him and teasing him. As the children got older and became more involved in school activities and Special Olympics, we sold the cottage as it became very time constrained to carry on two households. What we did with the proceeds, however, was to continue to search for acreage somewhere between the city and the North Woods. We finally found what we were looking for around Jason’s age of 20 – a little hobby farm of 4 acres 25 minutes north of Green Bay.

Jason graduated from high school at this time and was working at a manufacturing plant. Unfortunately, Jason’s seizures had also increased in both quantity and intensity. With the help of a bio-feedback therapist, he identified that Jason was experiencing anxiety seizures based on stress – stress on the job as a result of losing his job coach, a fast-paced environment that he was unable to keep up with, and language barriers due to demographic changes in the workplace. Jason was becoming angrier and lashing out physically – including at his mom. It was the first time we really had to dig deep to figure out what was going to be the best environment for Jason if we were unable to control his anger and physical outbursts?

Since we always included Jason in family decisions – we could also not ignore Jason’s apparent love and comfort in a country setting. Our first decision was to remove him from the manufacturing environment and give him a direction of life purpose. We enrolled him in a 9-month horticultural certificate program and with the assistance of a tutor, he graduated with his certificate in 2 years. With that degree, we promoted Jason to caretaker of our land and horses. We also built him his own living quarters on the west side of our 40 x 45 pole building – so I guess, for us, the plan actually just formed out of circumstance. We also met with family members about their ability to care for Jason at our country setting should something happen to us. We then formed a family trust in which our youngest son has first choice to move back home and care for Jason; if he is unable to care for Jason, then Mark’s brother/wife have agreed to sell their Green Bay home and move to our home and care for Jason.

Fast forward 20 years, Jason is now 39 years old and we are retired, and it has come to our realization that Mark’s brother/wife are in the same age bracket as we are! Coincidentally, Jason’s cousin wants to move from Dallas, TX, this summer and also wants a country setting. After several discussions, we are going to sell him 3 acres of our land and he has agreed to care for Jason should something happen to us or his uncle.

In summary, although supportive and custodial care were options for Jason, we really never went into serious conversations as we wanted to keep Jason’s love of the country setting intact as well as provide him with the tools to remain as independent as feasible! It really does take a village …

Lastly, I would also like to suggest that this would be a great topic to have as a parent forum at the next scheduled conference consisting of perhaps a panel of 3 parents – each with a different approach selected (i.e., independent, supportive, custodial care). Younger parents could then ask questions to each parent as appropriate.